It has been a crazy spring into the summer in which multiple projects are either finished or in the process of being finished. In this EXTRA, all the projects will not be written about, these will take time to write up and explain. At least one will have a follow-up YouTube video to it.

A contingent from the new Bridgton and Saco River R.R. came to Phillips and helped with track work on July 29.
Many of these folks also planned to participate in the Civil War train raid the next day!
Above are John Kahler, Mike Burns, Josh Anders, Adam Cook, and Jordan Valladeres.  Not pictured: Dalton Hulsey, Austin Kueser and Samantha Lieber.
Thanks so much for coming and pitching in! 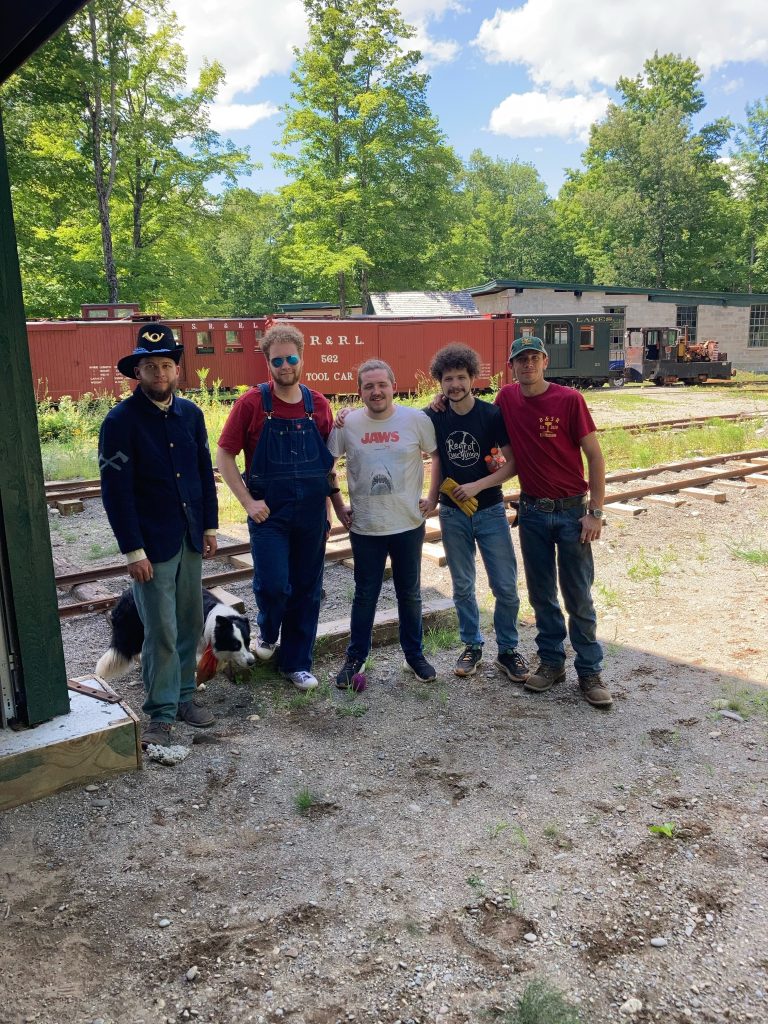 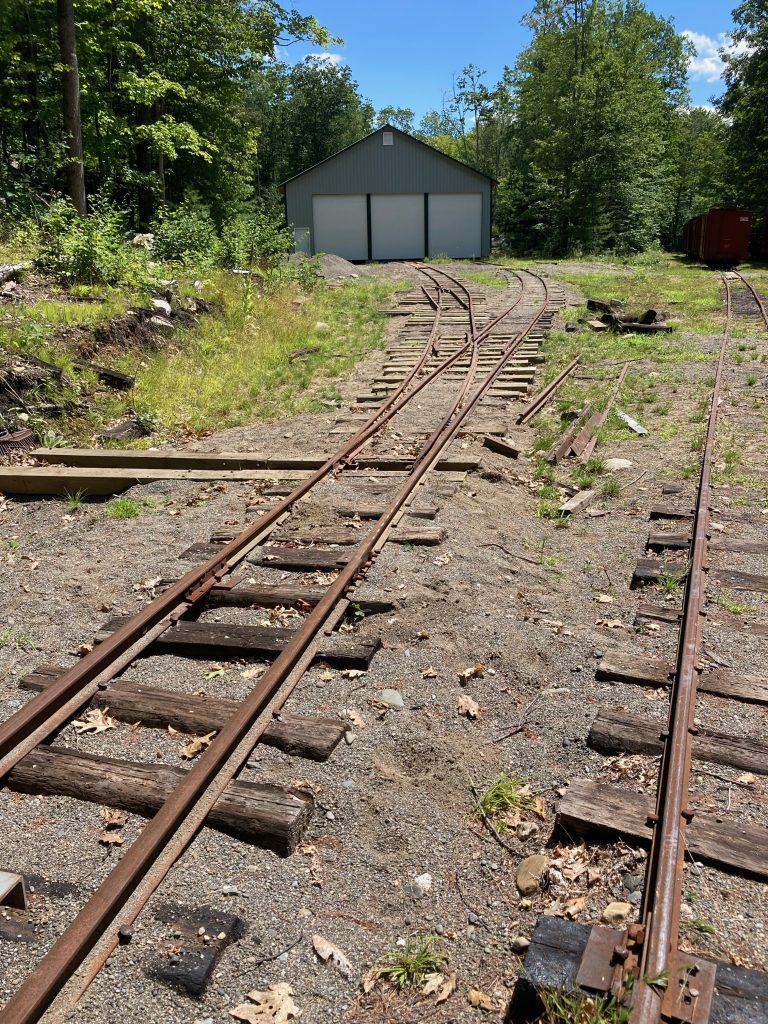 After extensive work on the diesel and new brake shoes last year, Brookville No.12 Jason Webber installed electric horns and rear view mirrors on the unit and the unit returned to service after a 10-year-long hiatus. 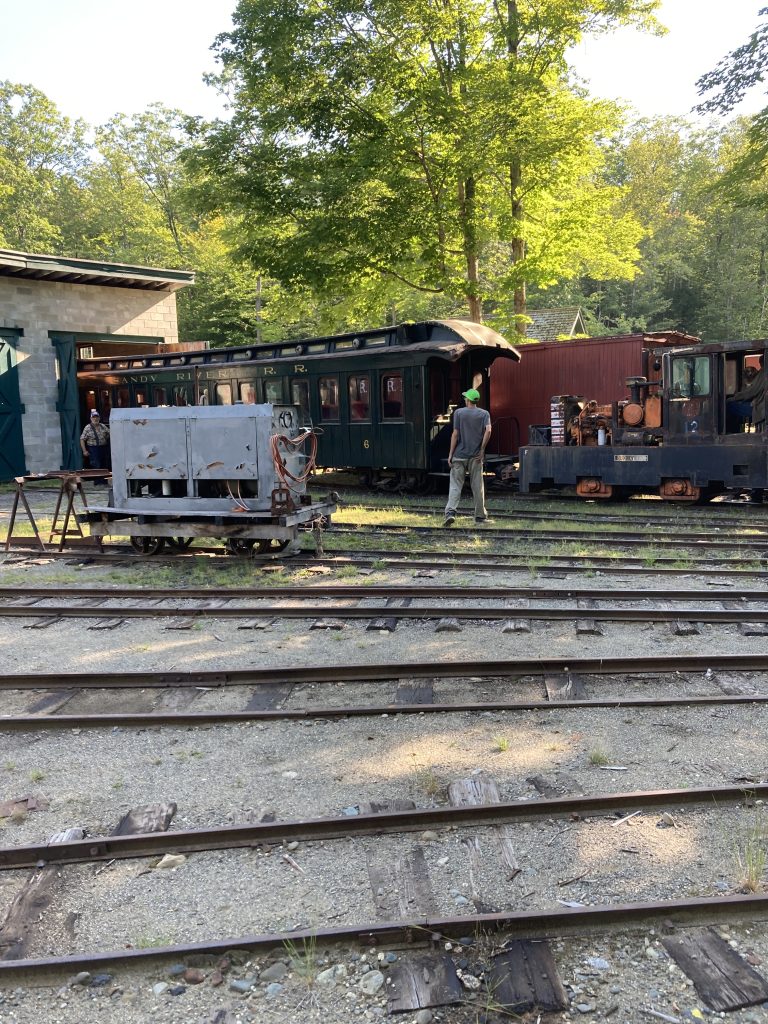 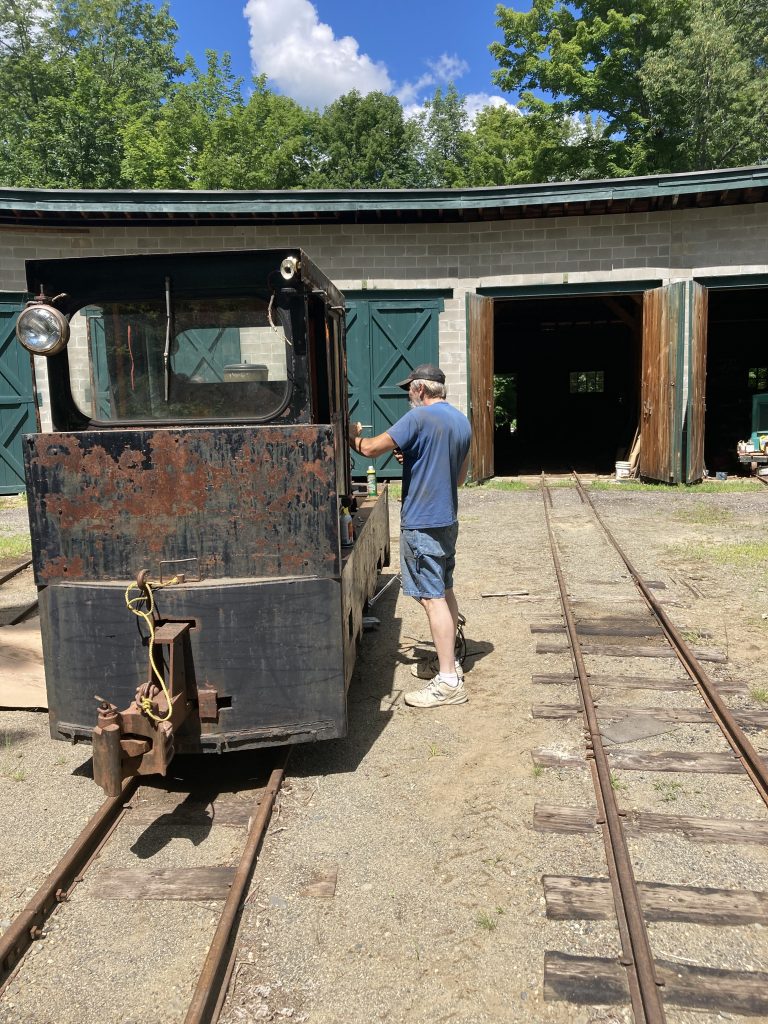 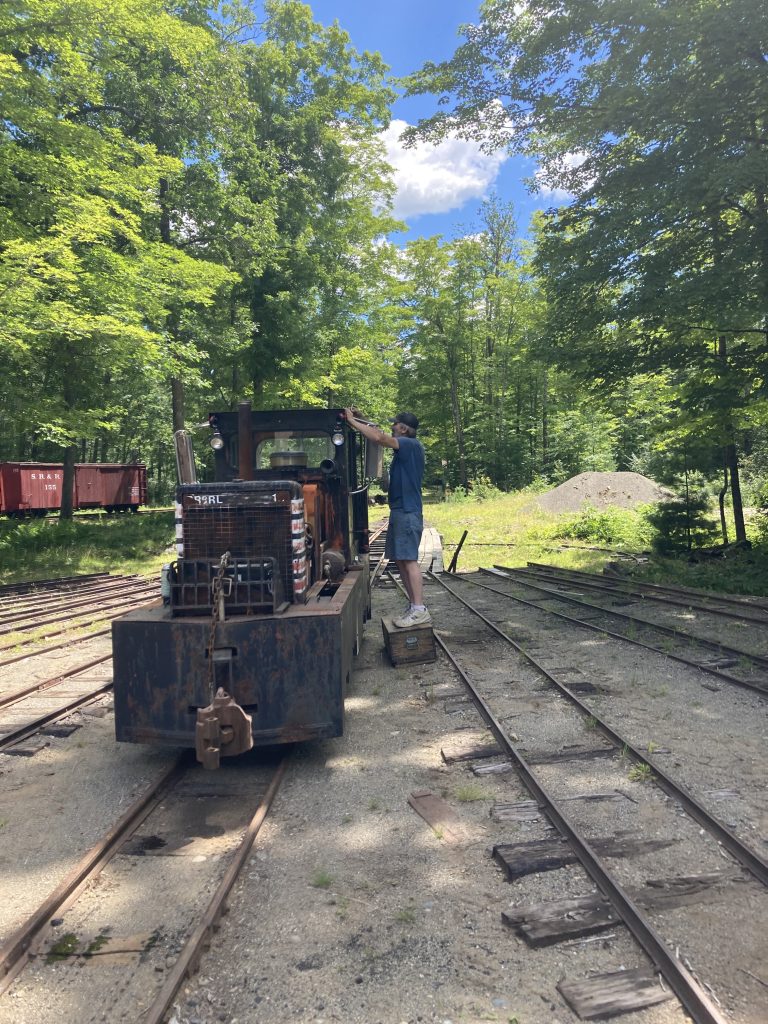 The Brookville was our power for the first two weekends of our season. Then the gearbox for No.4, the Wesley Spear, returned from overhaul at Maine Locomotive Works in Alna. John Stinchfield and Jason Webber installed the gearbox.  They also installed new air brake actuators and No.4 returned to service during Old Home Days weekend!  This is the first time we have had multiple locomotives available for 5 years! 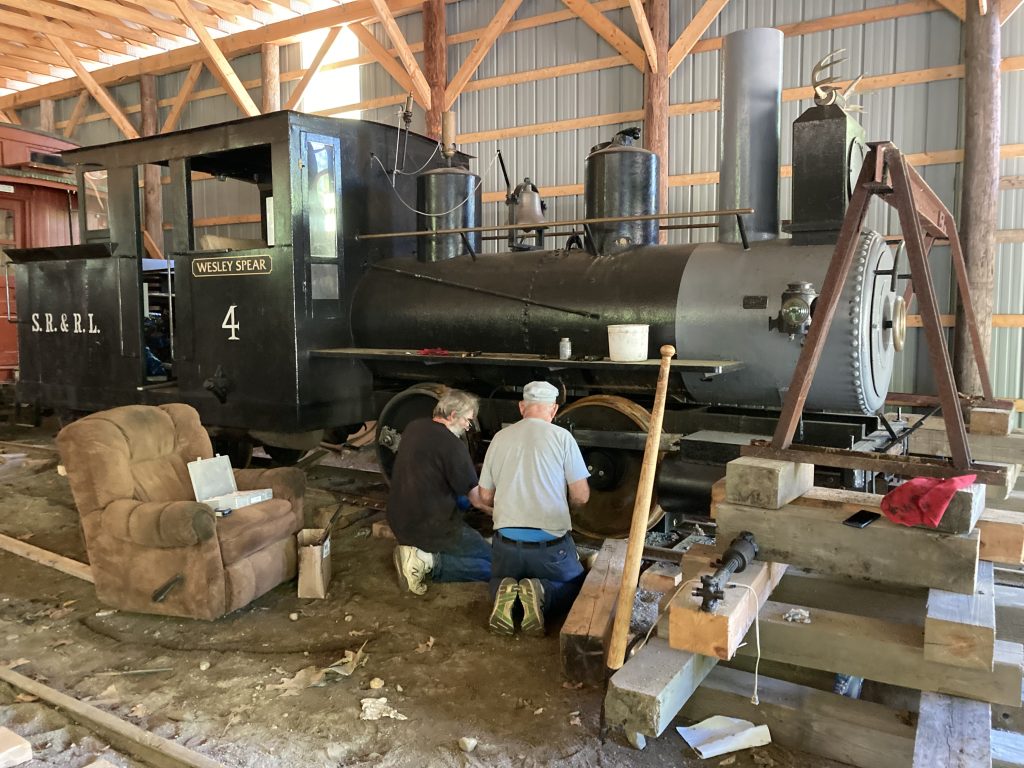 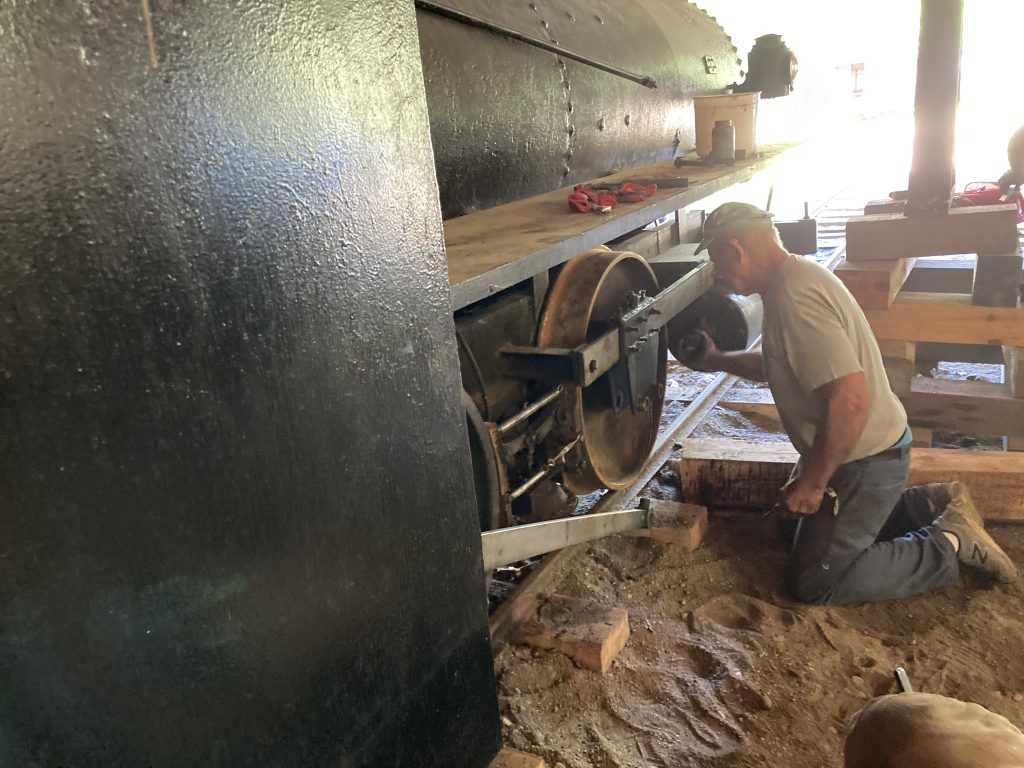 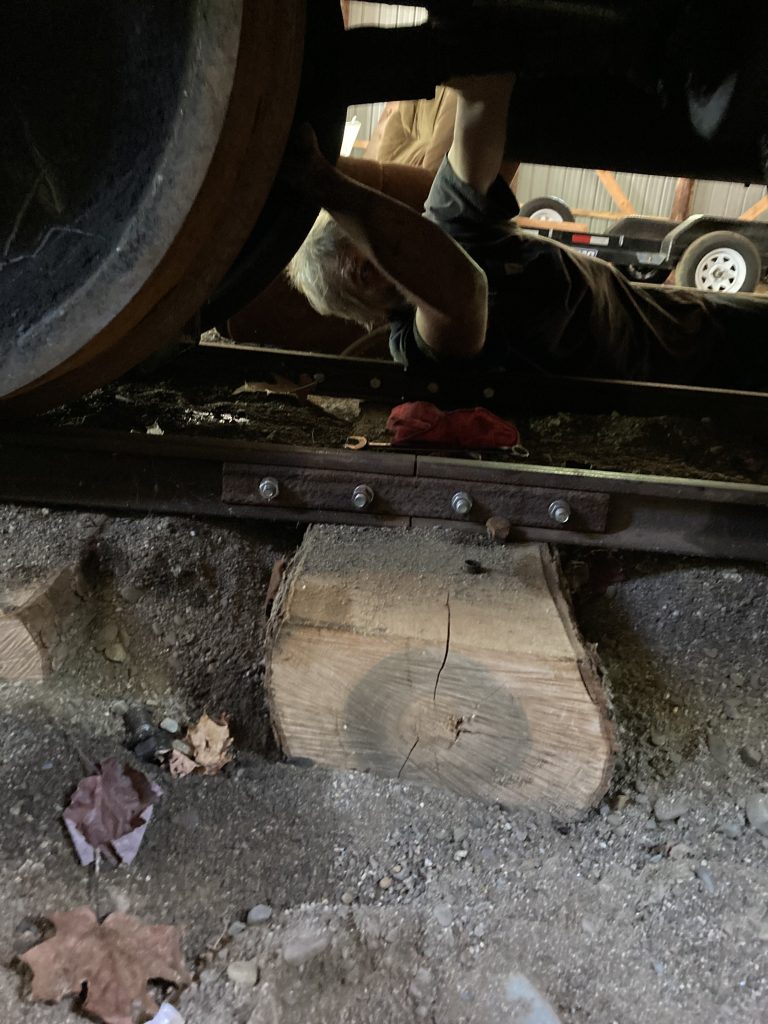 The S.R.&R.L. played its part in the return of the Old Home Days celebration to Phillips. On Friday and Saturday, we featured ice cream trains and sold out the 240 ice creams we had purchased for the event.

No.4 was readied during the day Friday and covered the return of the 2 P.M. train and the rest of the trains over the weekend.
John Stinchfield and Bud Godsoe represented the railroad on Friday, starting and running our 1924 Mack truck during the town parade!
It was an extreme effort by all of the S.R.&R.L. crew to make the weekend a success, from those who served ice cream, worked upon our Sanders station and platform, performed mechanical work on the locos, brought Coach No.6 out of the Roundhouse and out onto the line, and operated the trains, the truck, and the Gift Shop!!  Congratulations and kudos to all who pitched in during the week before and over the weekend of operations!! 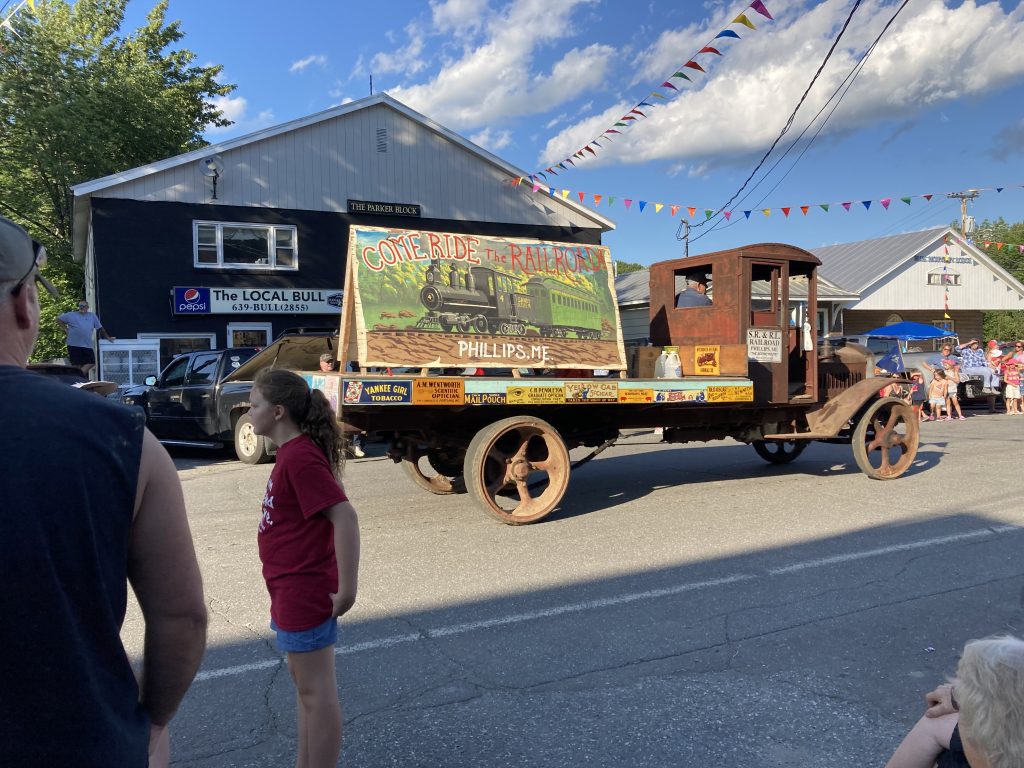 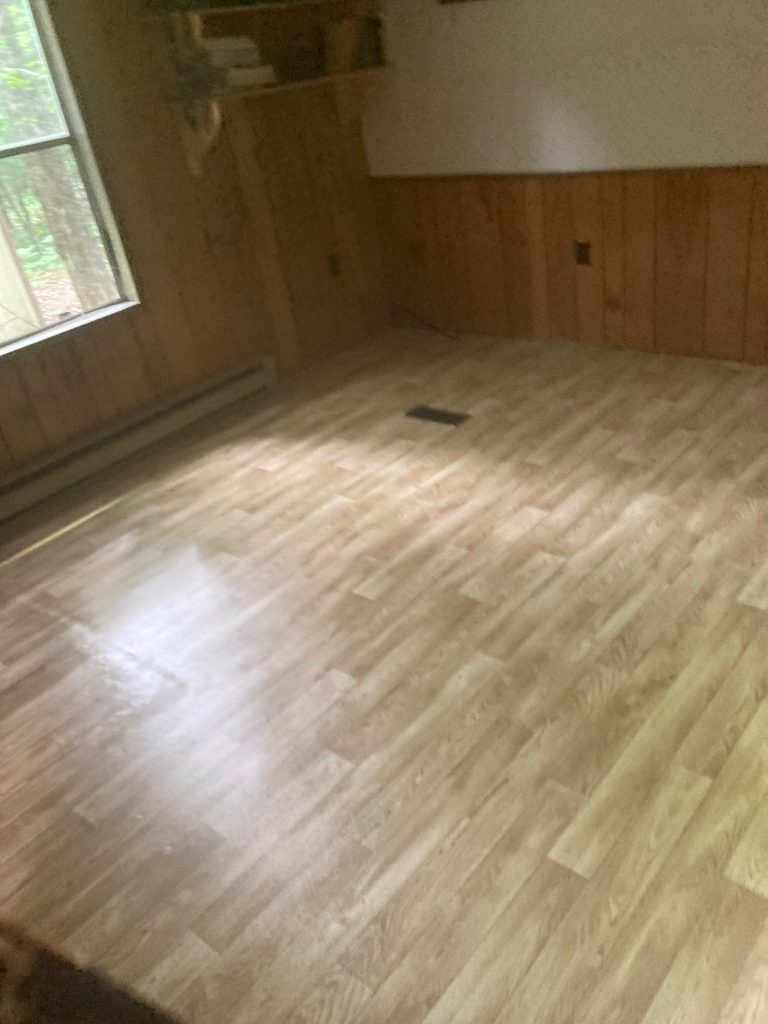 The term for members of the Board is three years.
To be nominated for any position, candidates must be endorsed by two other members in good standing.
Endorsements are returned by mail, to the Secretary, Bob Black for a tally prior to the October meeting.