The Next Stop Is Kingsfield

Continuing in the series of The Franklin County Narrow Gauges is The Next Stop is Kingfield.

As with the past volumes, this is an in-depth historical overview of the Franklin & Megantic and Kingfield & Dead River Railroads.

A few years ago, prior to writing an outline for The Next Stop is Kingfield, I hoped for 100 pages of text as newspaper coverage was lacking at best. But as new sources were found, it ballooned to 220 pages. As with The Next Stop is Phillips, a few formatting tweaks made the text a bit more manageable to work with.

*Four double-sided tip-outs (2 pages wide) of seven F&M equipment blueprints from the Portland Company. The 1899 F&M flatcar orders were built based on an August 9, 1894 Wiscasset & Quebec blueprint. So you get a W&Q blueprint by default. If you scratch build, it is a must have.

*Sanborn Maps of Kingfield showing the yard and mills (1901 and 1908). The 1901 map shows the location of the first Kingfield enginehouse.

*The most extensive history (multi-sourced) of the West Freeman and Hillside Stations published to date. Both locations are noted with GPS coordinates. There is even a picture of the surviving West Freeman Station foundation taken in 2015, along with its dimensions.

*The lumber size and spacing of the frame (rafters were not listed) of the first Salem covered depot.

*Photos of the Huse Mill at Carrabasset and Kingfield. Carrabasset has GPS coordinates and maps, along with a present-day photo of what’s left of the mill foundation.

*A photo of Drew’s Mill and location with GPS coordinates.

*The actual builder of the first F&M snowplow, where it came from, and who it was built for (it was not built for a two-gauge railroad). Its construction predates the F&M!

*Two previously unknown F&M and K.D.R water tanks. The first one comes with the approximate GPS coordinates and tank house size. The second water tank is a general location based on news stories. A third tank house, which went out of service in 1915 and was destroyed in 1921, has the listed materials and amounts that comprised the building.

*Further use of field notes that made up the 1916 I.C.C. report. Useful in scratch bridge building, dioramas, and layouts. One may be of particular interest to scratch builders. Have you ever seen a photo of Packard Trestle? The survey notes of the trestle are in the book, in all their glory.

The above highlights are just a smattering of what you can expect in The Next Stop is Kingfield. For those who read The Next Stop is Rangeley, this volume exceeds that in the amount of new information and crazy little facts.

SKU: next-stop-kings001 Category: The Next Stop is Kingsfield 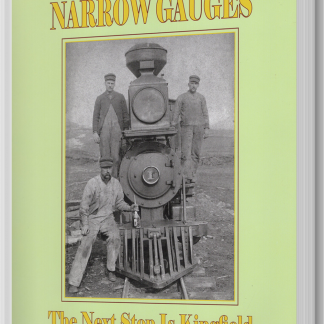 You're viewing: The Next Stop Is Kingsfield $54.00
Add to cart