The last volume in the Franklin County Narrow Gauges series, The Next Stop is Farmington, is well underway. At the time of the 2016 Narrow Gauge Convention in Augusta, the text was around 180 pages and is now over 280. And this year alone I have edited out over 12,000 words – its sheer size is evident! When will the text be ready for the editor? In a best-case scenario, perhaps by the end of 2018. But I hope to have it wrapped up no later than mid-2019.

The Next Stop is Farmington has very distinct veins. It starts out using news reports, then shifts to Maine Central correspondence and records from 1912-23, for which I have copied over 2,000 pieces. During an April 2016 trip to UMaine, we culled out over 700 scans alone.

After my most recent trip to Maine in September 2018 to run down a few remaining items, the last big thing on my to-do list is to find a Ford Model T and Model A body expert. This should polish up chapter 15 and close a number loose ends on those track cars.

If you like the nuts and bolts history, you will be amazed at the sheer amount of new and documented information. The same goes for modelers due to the information discovered in the records book, like the size of the chimney pipes in tank houses and the board sizes used on station platforms.

A Few Highlights in the Book:

These are just some highlights – As always, expect to find a great deal more that has never been covered before!

Some confusion with photos of track cars built in 1923 by the Sandy River & Rangeley Lakes railroad has led me to consult a Model T expert. Photos of track cars No.1 and No.2 have what is believed to be exact dates and locations. Included with each car is a Q&A with the expert. Along with the expert information, five other track car sources are laid out and woven into the text and photo captions to give the reader a broad picture. For those who closely follow equipment, I didn’t discover anything entirely “new,” but I did piece together a lot of little facts and insights. One example of this is a common photo, which the Model T expert pointed out I misinterpreted. The photo is, in fact, an optical illusion and is not what it appears to be on two separate fronts. An insight from the expert even spilled over into Railbus No.3. Our back-and-forth conversations took all of December to get right, but I have toned it down so it is concise and you can draw your own conclusions from the information presented.

At this point, the first 100 pages of text are 99% done. A few dates need to be double-checked, and I am working on the first round of edits. Every month it seems that something new pops up that has to be investigated further. For example, a mill photo was found in October and I need to confirm its location by a ridgeline in the background. If my suspicions are correct, I believe I know the name of the mill and its dates of operation.

Below is the start of union coverage that will

Judging by the wording of past years’ articles, I believe there was some type of union, or similar association representation for T&E members. In the last week of January 1910 came the first ever report of the S.R.R.L. engineers being represented by a national union:

“President J.H. Hamilton and vice president J.P. Carrains financial secretary Waldron, treasurer L. Nelson, F.E. Hollis of the joint protective board and Mr. Ira T. Whittemore, of Portland, member of Great Eastern lodge No.4 of Portland, Brotherhood of Locomotive Fireman and Engineers were in Phillips a few days ago in the interest of the order. While here they worked under the dispensation from the grand lodge and initiated all the engineers and fireman of the Sandy River & Rangeley Lakes Railroad into their order…There are five lodges in the state.”

Today a lodge is called a committee. A lodge/committee is made up of various locals. The S.R.R.L. engineer’s local, along with M.C. locals, made up this lodge/committee. I assume three of the five lodge locations would have been Portland, Waterville, and Bangor.

If the engineers had national representation prior to 1910, then they were now changing that.

In 1910, it was not reported who represented the conductors and firemen. In 1911, representation was by the Brotherhood of Railroad Trainmen (B.R.T.). According to non-newspaper articles in 1911, the B.R.T. local representatives were E. Voter and J.B. Mitchell, through a Portland-based lodge founded in 1896:

At a large railroad union conference on June 1, 1916, a written answer to a question stated that the S.R.R.L. and the Bridgton & Saco River railroads were not covered under the national union agreement that included the M.C. 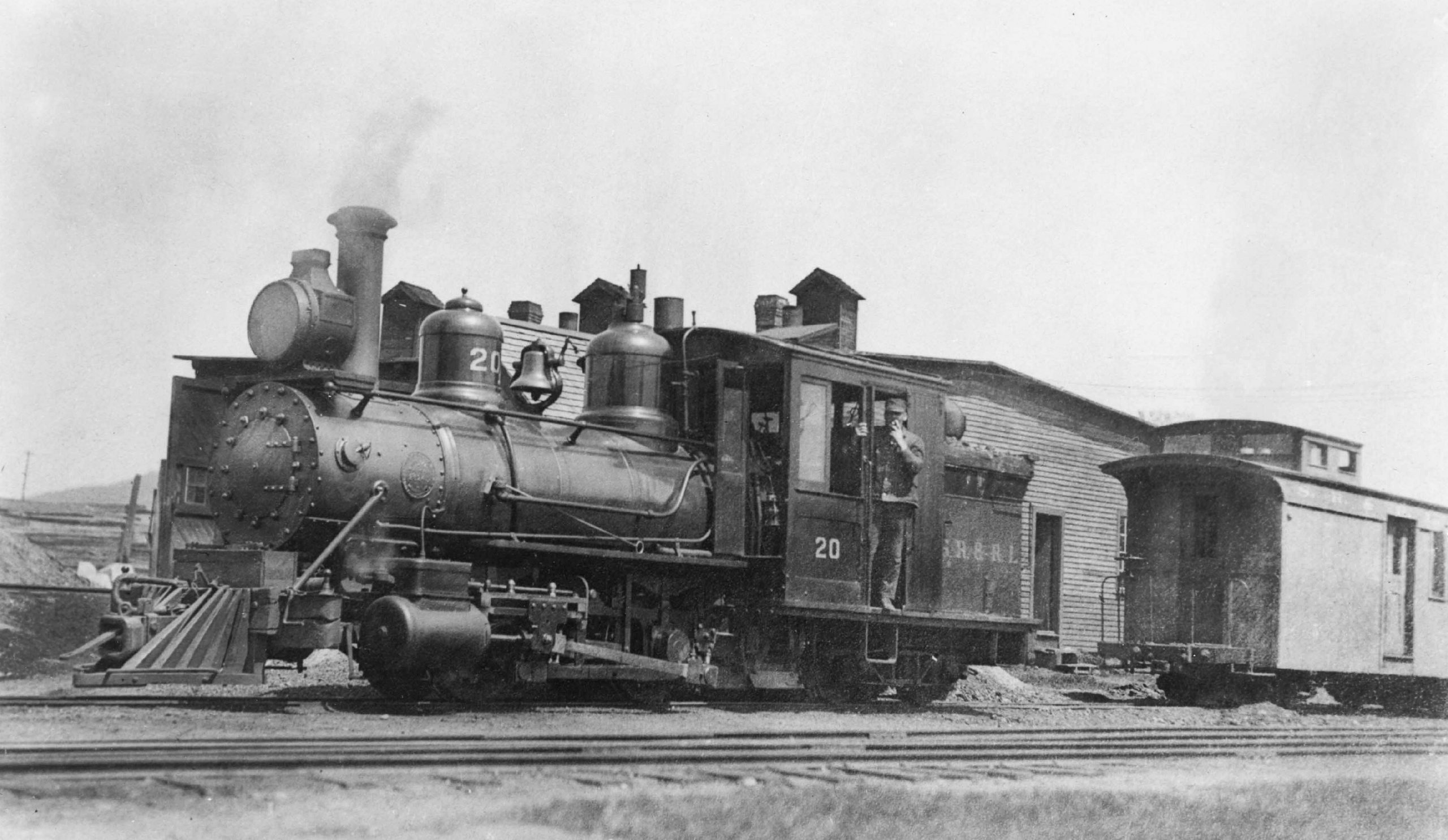 In the last 7 weeks or so all punch list work ceased as I have been focused on five photos and information relating to one particular semaphore/signal at Phillips, and related letters of one for Strong.

The rework all started over an innocent semaphore photo referral I received from late in operations. This led to fixing an interruption error in one photo, then to coalescing disjointed semaphore information that was spread throughout the text. Sizes and shapes of grade crossing posts even became part of the background information. I have had semaphore help from Australia, including such insights as trimming semaphore signal wicks, which picks up where a company letter left off at.

During this seven-week jaunt, a non-semaphore byproduct was discovering photographic examples of all three S.R.R.L. stockcars. Two of the photos are dated to the day; the third is 1915 or later.

Since the last update, the back and forth over the semaphores ended in December. With the help of Bill Hanks, we have come to an interesting outcome through company records and photos, which should be interesting to most. There is one previously published photo that is speculative; a theory is put forth, and you will have to make your own judgment as to whether the photo shows a Sandy River railroad signal for P&R trains in the late 1890s to 1903.

At the January 25, Springfield Train Show, which I attended with the S.R.R.L. folks, I brought a photo for discussion and showed it to attendees who follow the S.R.R.L. equipment. Days after the show, I asked Wesley Ewell for his estimate of the length of the car in question, which I thought would help identify which of the three cars it was originally, before its non-revenue service use.

Wesley’s answer shocked me: “24 foot and a B&B car.” This sparked a three-week go around which went down a few rabbit holes.

The photo’s stated information has been misinterpreted since the 1950s, and was in fact taken six years earlier than thought.

It now ties into a photo I acquired a few months ago, which then relates to two photos in Two Feet Between the Rails V-II. All four photos show this car in non-revenue service between the late summer of 1910 and no later than August 1914, at two different locations. Due to confusion I had with which B&B car it was, the photo here of No.5/554 has completely changed its meaning. I will only explain it at this time as a “bridge” photo. Some items are still being rewritten to reflect events in a new light.

As you can see on the front page of the site, the dust jacket is finished and a person has been hired to lay out the book.

The editing process is what the delay is now, the text is done.

The book is finished and the process starts this week to have it laid out. Through editing and lowering the font size, the text was reduced from its bloated outline by 70 pages to a final count of 211 pages. I believe it will be under 500 pages when all said and done.

One example of what was left out is an ongoing project to find the original Rangeley station. This has been ongoing for over 12 years with help from Wesley Ewell. It is too complex to explain in writing, it is one of those subjects that has to be explained orally and with photos and documents in person.

The short version is we believe the freight house section of the station is now part of a house 300’ away, but where is the station? This was not the only station to “disappear” in the 1970s – Carrabassett and Reeds stations were here today and gone tomorrow.

Of the four books, this will be the toughest read due to the amount of both new and corrected information. For people who model, you will have details never published before, like the size of a station platform boards, or upgrades to the Marbles layout:

For those who follow the S.R.R.L. equipment, at the end of the book there will be car graphs documenting known car numbers of the F&M (25), P&R (52), and S.R.R. (84) through company records of 1898, 1901-03, and 1907. This predates the cars listed in Two Feet Between the Rails and the 1916 I.C.C. Survey. If you so choose, you will then be able to use company records or photos you have access to and fill in missing car numbers if they were a boxcar or flatcar.

For those who follow the history, there is much for you to consider also. In a lot of cases you will be presented the information but I leave it up to you as to what it means. An example is a published photo that is claimed to be 1916, but is documented to be 1910. A B&B car is in the photo… you will have to decide which one of two it could be. The 1918 strike is covered in a chapter that got its name 8 years ago, despite the fact that history has recently been repeating itself in “The Strike & Pandemic.”

17 The End of a Shooting Star